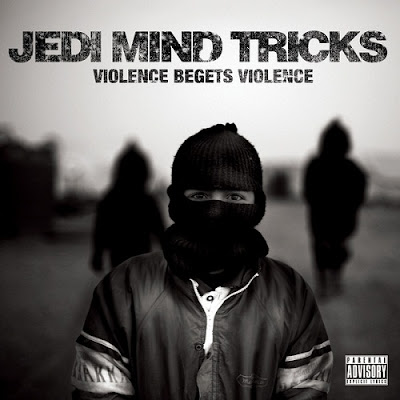 The first album by long-running Philadelphia hip-hop collective Jedi Mind Tricks since 2008’s A History of Violence is also their first outing without production by founding member Stoupe the Enemy of Mankind. Stoupe’s production helped mold the group’s sound, and offered a gruff, hard-edged background for rage-spewing rhymes that approached horror movie levels of violence from MCs Vinnie Paz and off-and-on member Jus Allah. Violence Begets Violence is no less intense without Stoupe’s input, with an overwhelming amount of gory rhymes and enormous buzzsaw beats on standout tracks like “When Crows Descend Upon You” and “F**k Ya Life.” The scratchy prog rock sample that “Target Practice” is built around makes the song and adds fire to Paz’s fervent delivery. The tone of the album is hateful by nature, but its over the top qualities lose their charm and character quickly. The lyrical mass murders and ultraviolent crime sprees never quite make it on either side of cartoonish or believable, but sit somewhere in the middle, quickly becoming more ignorable than anything. The lack of production ideas really starts to shine through by the time the laughably reggae-flavored beat of “Chalice” shows up. Jamaican rhythms, dancehall vocal hooks, and hellish horrorcore raps apparently don’t mix after all.