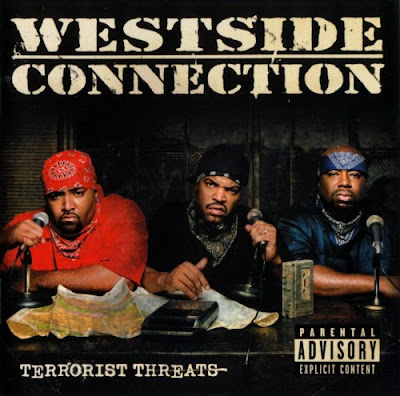 A long seven years after the gangsta rap supergroup Westside Connection released Bow Down, one of the definitive West Coast gangsta rap albums of the ’90s, they reunited in 2003 for a second go-round, Terrorist Threats. The state of the rap union had changed a lot since 1996, which was the height of the original gangsta era, back when 2Pac and Biggie were still alive and in their prime. So it’s a little unsettling to hear the trio of veteran gangstas in Westside Connection — Ice Cube, WC, and Mack 10 — still trying to rally the “Gangsta Nation” circa 2003, the year of young gunners like 50 Cent and pretty-boy skirt-chasers like Chingy. Yet the old-fashioned gangsta growl of Westside Connection seems all the more poignant as a result — as if they were ghosts of gangsta past, back to haunt listeners — especially on songs like “So Many Rappers in Love,” where these O.G.s call out their much younger, “21 Questions”-asking contemporaries. Not everything on Terrorist Threats is gruff and bitter, though. Standout songs like “Gangsta Nation” and “Lights Out” have plenty of feel-good swerve, especially when the likes of Nate Dogg and Knoc-Turn’al grace the hooks.