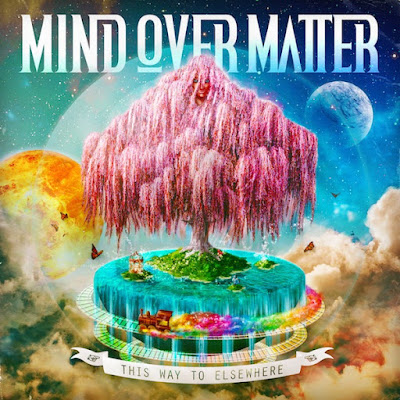 The AU Review.com: ”Highly underrated Sydney hip-hop duo (now a trio) Mind Over Matter have been rapping their hearts out for six years now, always proving clever songwriters and rhythmic rhymers in the process. They have supported the biggest names in Australian hip-hop, yet never seem to have climbed to the level of popularity which hosts acts like Bliss N Eso and Hilltop Hoods. Their latest LP This Way to Elsewhere begs the question of why, serving as a showcase of success long overdue.
There is unquestionable skill here – equal to the heavyweights of Australian hip hop – yet they are still relatively small time. Despite some inconsistency in the quality of this album, the trio of Smiles Again, Willow, and DJ Ntaprize deliver the strongest Mind Over Matter LP yet.
Unlike previous works, Mind Over Matter finally have that high-energy bombast to blow the top off a Splendour in the Grass tent, bouncing along Bliss N Eso on the brilliant ‘What The Say,’ giving them a sure-fire festival-ready jam; but the energy isn’t captured as well on the LP’s other 14 tracks. Despite a few shortcomings, what we get on This Way to Elsewhere is a beautiful sense of melody, crafted over the kind of lyrical depth that complements the half-rock, half-rap productions that you can hear on tracks like the opening “Dream Train” which features a poignant hook from the brilliant Reichardt (AKA Jon Reichardt).
MCs Smiles Again and Willow share the kind of chemistry necessary for a duo to work effectively, each bringing their own distinctive style to the table. Their performances are consistent, spitting like seasoned emcees and picking up the slack when a few misplaced hooks damper tracks, like the underwhelming “Saved Me” and the messy “Tomorrow’s History.” There’s an excessive reliance here on local vocalists to hold tracks together with hooks which aren’t as suited to the beat as the raps are, this can make things sound a bit cluttered at times, given the diverse universal sound they are going for in the soundscape of This Way to Elsewhere.
Socially conscious rhymes are peppered throughout the 15-track LP, as Willow and Smiles Again attack injustice with palpable frustration, navigating muffled samples, from Andre 3000 to the famous Aldous Huxley and Mike Wallace interview from 1958, with rhymes full of conviction and progressive sentiment. Again, the only thing that lets them down at certain points throughout the LP is the often incongruent hooks.
Thankfully the guests spots that work really well are from fellow emcees. The aforementioned Bliss N Eso collaboration holds one end of the LP’s flag high, while the other sits strongly in the hands of “A Little Brighter,” an exceptional, soulful collaboration with fellow I Forget, Sorry! artist Chance Waters.
This Way to Elsewhere is a nice package of what Mind Over Matter are capable of, and their own verses never fail to impress. While there are times when the production tries to get in too many directions at once, and hooks let some tracks down, Mind Over Matter have delivered an LP which both their fans and themselves can be proud of, cutting through the thickening waters of Australian hip-hop to remind us that their success is well overdue.
Review Score: 7.5 out of 10”