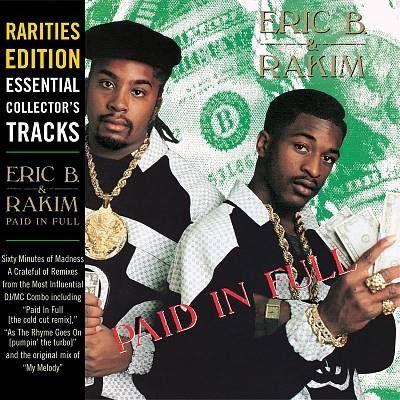 Tim Sendra@allmusic: ”Part of the Rarities Edition series, which Universal distribution used as a way to spin off the second discs of its Deluxe Editions series, this disc is made up mostly of Paid in Full-era remixes taken from U.K. 12″ releases. First up is the incredible “Seven Minutes of Madness” remix by Coldcut of the title track, which is a contender for greatest remix of all time. Funny, witty, and funky, it’s a sampladelic miracle that never gets old no matter how many times you hear it. The other remixes are not quite as effective, but are still a load of fun. The highlights are the Derek B. mix of “Paid in Full,” which drafts in John Mellencamp’s “Jack & Diane” guitar riff and some sexy female voices, the Chad Jay mix of “As the Rhyme Goes On,” which is a turntable-rocking remix that monkeys with the beats quite entertainingly, and the Richie Rich megamix of “I Know You Got Soul,” which adds some cool samples and makes the track very thick and funky. The only remix that doesn’t fly is the overly long and hokey mix of “Move the Crowd” by the Democratic 3. Also included are the original mix of “My Melody,” which was originally released on the flipside of the duo’s first single, “Eric B. Is President” (the version on the album was remixed by Marley Marl), a really nice a cappella mix of “I Know You Got Soul,” which lets the listener focus on Rakim’s flow, and dubs of “I Know You Got Soul,” “Eric B. Is President,” and “My Melody,” which bring Eric B.’s production skills to the forefront.”